I only really listen to 3 albums

The best is the most subjective thing ever. What criteria do you even base the scoring on? Jk obv.
Noel wrote simple tunes for simple people and it worked, that’s not even meant to discredit him or the listener, it just is what it is. They were poppy enough to not be offensive across the board of music fan, the main people that would outspokenly hate on Oasis had an agenda of needing to look cool, quirky, out their, more music nerdy, special, intelligent than anyone else. Any normal person seeking more substantial music would just ignore Oasis and listen to what floated their boat.

Defo maybe, what’s the story and the master plan. They’ve got tunes but these are the ones I listen to non stop! 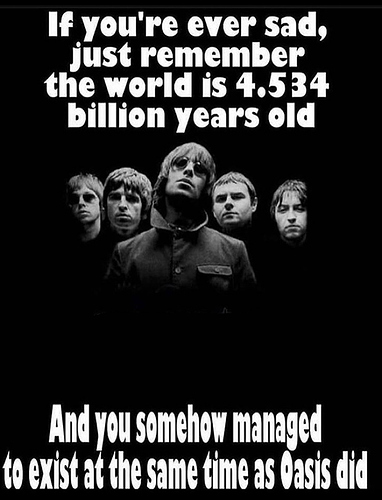 I thought you meant only 3 albums by any artist lol

No band could ever be considered the best if only 28% of their albums are any good. That’s based on DM and WTSMG being the only ones worth listeneing to

The Beatles are 50/50 and they have been regarded as the best many times by folk.

i don’t mean to be an asshole, but please fuck off with this oasis talk to some shitty thread that i can never visit

Which one are you then? The simpleton trying to protect your idols or are you the Irate music nerd protesting too much? Jk of course.

i don’t mean to be an asshole, but please fuck off with this oasis talk to some shitty thread that i can never visit Lol. I’m only really going on the small bit of stuff I’ve seen of him which to be fair was some live at the Apollo footage about 10 years ago. It was basically, ‘I’m from Glasgow, English people think I talk funny, Scottish people are tough’

On the topic of Scottish comedians though, I’ve been reading Connolly’s Tall Tales and Wee Stories book and it’s fucking hilarious

It was basically, ‘I’m from Glasgow, English people think I talk funny, Scottish people are tough’

I guess that shit helps sell DVDs and tickets, but he doesn’t make a living out being Scottish.

This somehow makes me feel sadder

Oh shit, he posted that non-ironically?

re. Scottish comedians: Jerry Sadowitz is an unbelievable artist. Funny as fuck, totally committed to his “offend absolutely everyone” shtick, no compromises plus a supremely talented close-up magician. If you ever get a chance to see one of his shows please do.

It’s also one of the hardest acts to describe in a positive way:
“He was amazing! Really racist, anti-semitic, misogynist etc., but in an unrelenting stream-of-consciousness way that makes it absurdly funny, plus he pulls rabbits out of hats whilst pretending to be disabled”

Also, in my opinion Limmy is one of the most naturally gifted and subversive comedian/entertainers in the UK (the other one that immediately comes to mind being Bob Mortimer).

He’s simultaneously a psychotic troll who delights in chaos, and a really honest, “woke” family man with his heart in the right place. Done a lot for discussions around mental health + suicide also.

For context and contrast check out his vines compilation (which is like a mad Aphex Twin video, with more canny character studies + comedic ideas than the majority of BBC sketch shows put together)

…and this interview (hosted by Richard Herring). Here Limmy is more relaxed + full of natural mischief and surreal patter throughout:

That’s a thing too, he’s one of the best hand-magic performers in the world, but he almost makes a joke out of that. I think that’s part of why there are no videos of him online.

He’s written these books on it:

Pretty sure the only proper video of him is this, which he stars in:

Can this be about Covid again.

Anyone in this new lockdown area.

Tried to find out on Twiter, but maybe somebody here knows… Do the conspiracy people think that ALL health professionals are in on the big coronavirus hoax, or do they think that all these people who’ve devoted their lives to medicine have been fooled?

I’m sure Jerry Sadowitz had a late night TV show back around the late 90’s early 2000’s. As a teenager I remember enjoying it but probably not understanding much of it and probably waiting for red shoe diaries to start on channel 5.

He did, late on a Friday night.