Took my kids to our first critical mass cycle ride. The turn was exceptionally large with close to 2000 cyclists riding together and shutting down city traffic for a couple of hours.
It’s petty but it felt pretty good to see some of the drivers stuck in their shitty SUV audis just helpless.
That said, the ride is organised every last friday of the month at the same time and follows a set route.
For the most part onlookers were pretty stoked and supportive. Only a couple of people fuming at not enjoying their company cars.

Nice. I used to join in with CM’s in Brum when I used to work in town.

Nah, fuck them. There’s an ambulance crisis and there aren’t even as many HGVs on the road as usual just now. Maybe this is an easier time to get away with it? They’re doing it up here just now too. When they can be bothered.

If I was stuck in my “shitty SUV” on my way to get medicine for the kid or something, or with a train to catch, or if I was in a taxi with the meter running, I can’t really picture myself sitting there helplessly while a bunch of stuck-up trust-fund psuedo-hippies sat in the road fiddling with their iPhones.

Maybe these people think that only evil corporate businessmen drive SUVs, and not people with big families, people with disabilities and the elderly.

Chill out man.
The cyclists let emergency services and public transport through. Same goes for old people, people with kids or disabilities looking to cross the road.
If a person was in an emergency they let the cyclists know and a path is cleared. We’re not savages.
Brussels is one of the most congested cities in europe partly thanks to a shit load of corporate vehicles on the roads. It’s easy to recognise them because they’s audis, bmws, minis etc usually using the obvious routes to and from the center.
Last night was exceptional and frankly for them to get stuck in traffic for 30mins could be worse.
You weren’t there.
You’re a good man but sometimes you flex you’re keyboard warrior skills a bit too hard on here. If you check my post you’d see I felt petty looking at some of those stuck in their cars. To my knowledge no one died either side of the fence.

OK, I guess it depends on the individual events. Blocking the motorway here did nobody any favours, and as a cyclist it’s obvious this stuff makes regular drivers (I’m one of those too) hate cyclists even more.

If cyclists want more respect and freedom, pissing off the drivers they have to interact with doesn’t seem like the way to get it. The amount of new cyclists since lockdown has been incredible, and I think half of them must have been issued with some revised Highway Code where they have more rights than cars, and the freedom to take up entire lanes. It’s been noticeable how much less forgiving car drivers have been since that sort of behaviour started outweighing that of the way regular cyclists ride.

These new cyclists aren’t confident, so they take up the whole lane rather than riding alongside parked cars, or nipping in and out of traffic when there’s an opportunity. Basic common sense of how to keep up with the flow of traffic.

To me these events are the equivalent of a bunch of skateboarders smashing up a memorial to complain about the lack of skateparks.

To me these events are the equivalent of a bunch of skateboarders smashing up a memorial to complain about the lack of skateparks.

Back to the discussion of cyclists vs drivers, seeing as I do both I totally agree that a lot of cyclists (especially new ones) have no idea ehat they are doing. Running red lights, no helmet, no lights, no hi-vis, noise cancelling headphones… THE ABSOLUTE CUMT CYCLISTS ARE THE ONES WITH CHILDREN ON BOARD (OR JUST THE CHILD SEAT WHICH MEANS THEY WOULD STILL BE BRIAN CANTS IF THE KID WAS WITH THRM) OR LEFT HAVING FOLLOW BEHIND
As a cyclist I will try and talk to a fellow cyclist to warn them of their reckless behaviour. A common response is “I don’t care” or “I know what I’m doing” to which I usually answer “Well, the poor driver who has every right to go through a green light knows what he’s doing and when you’re dead he’ll have to live with that.” Sometimes it works but usually it doesnt. That’s why there are Darwin awards I guess.

Regarding holding a lane, cyclists can do this within reason. For exsmple if I’m cycling in a cargo bike (or regular bike) at roughly the speed limit, then there’s no need unless there’s an emergency to speed past me and squeeze me into the gutter or parked cars where I could get doored.
If I’m just cruising and there’s seceral cars behind me then yes I’m being a knob and need to side up to let them pass.

A lot of cyclists, again mainly new ones, don’t realise that they need to respect the highway code like the cars albeit with a few exceptions.

Something which has impacted everyone’s road experience in cities recently is the massive amount of delivery bikes and pay as you go electric scooters which generally think they live in a world where no one else exists.

I understand the ‘rules’ but some things are just common sense. Like running a red light at a crossroads if you know the timing of the lights and it’s going to be in everybody’s interests for the bike to get the fuck out of the way. Anything to keep everybody moving.

100% agree about folk with kids on bikes. Based on the state of the roads around here. I’ve been knocked off or come off in a pothole enough to know that that sort of crash would probably kill a kid.

People bringing their kids into the Bikes vs Cars argument are the worst cnuts by a million miles. The “No, I will take the lane, and I will go at 5mph because I’ve got a kid balanced on the back or in a wooden box at the front” people make everything worse for both sides. Kids in those wooden boxes are pretty much exactly at bus-exhaust height too, which must be great when traffic’s moving slowly.

I’m sure that’s not an issue in a city with a properly integrated cycling infrastructure but the roads here are all fucked and the cycle lanes that those bureaucrats in Brussels made the city council install only function as extra parking spaces, or bonus pavement so it’s actually more predictable what’s going to happen on the road.

Not knocking anybody taking their kid on a bike when the surroundings are safe and they know what they’re doing but in my experience that’s never the case.

Watched a guy cruise through a red light with kid on the back and another trying to folloe behind.
Caught up with him told him he should be more careful especially with kid following. He tried to ignore me then told me to be quiet and that he didn’t care.

I then saw another cyclist do the stop at a redlight on a massive junction, cant see anyone so I’ll just run it.
Idiot didnt see the police van waiting at the same light beside him. Police propmtly caught up with him and gave him a word.

Some of us cyclists can be dumb. 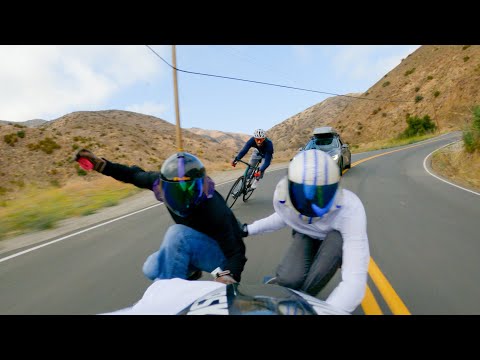