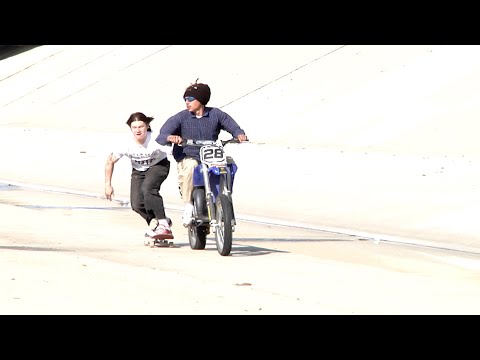 A Tyson Peterson part released on 4/20 sounds like the absolute worst thing I could imagine.

A Tyson Peterson part released on 4/20 sounds like the absolute worst thing I could imagine.

Absolutely not a fan of Tyson.
Or Figgy’s music.
Terry Funk saved the show.
Best bit was Reynolds and Ellington going back to back on the bump to bank.

T-Funk is so fucking legit

The whole video was incredible.

Don’t really get the Tyson hate. Yeah, he’s the epitome of the chaotic, scuzzy, stoner skater but he has a really fluid style for a rail chomper and seems very spontaneous in how he skates. His first line was really sick.

As was Figgy’s double-kink crook.

T Funk was next level. The drop down nose manual at Union Square was fucked.

Don’t really get the Tyson hate

Didn’t like the smashing into security guards tbh. If there’s someone in your way then just stop and come back.

Good skating in his part though.

That TP part is amazing. So fucking sick.

We are hardly the target audience anymore. 15 year old me would have been buying a Baker board next.

T-Funk part was crazy, a lot of spots I’d never seen in that (not that I know anything these days) that whole clip was so good.

first thing he does after landing a trick going at mach 10 is to push!

Loved that. The 360 flip going down the hill

A few of the baker family look like they take personal hygiene as serious as Putin takes the West.

Don’t really get the Tyson hate.

Didn’t like the smashing into security guards tbh. If there’s someone in your way then just stop and come back.

But yeah. But also, whatevs. It’s always been a thing some people do.

Both of those guys were siiiiiick. The Reynolds/EE One Two was gold. Figgy came through pretty hard, also.

Christ , have we forgotten our youth and the same skaters wearing what ever and smelling like a crusty’s camper van.
Lighten up you miserable Fuck’s it’s skateboarding.

They’re sick skaters that was a fucking nuts edit especially TF. Boy is on another level .