First place you ever skated?

For some reason I decided to Google the street outside my nan’s house where I first ever rode a skateboard. Looks like I remember, maybe not quite as steep!

This street is the first I ever bum-boarded down and started me off on 35 years and counting of skateboarding.

What was your first skate spot?

Same outside my grans up the scheme in Greenock, my uncle bought me a toy board one of those 80s jobbies with the plastic skid bubble on the tail. It was a yellow board with a blue condor on it yellow trucks and blue wheels.
Spent A couple hours faling about and learning to tick tack, this would have been 89/90.

My first proper session was was a day or two later at Glasgow Central on the main concourse. The family were having to wait 3 hours or so for a train to Lancaster. It must have been a Sunday because it was dead so what began with rolling back and forth between the seating area lead to me knee boarding in huge circles as fast as I could around the whole station, the floor was probably the smoothest I’ve ever ridden, even with plastic wheels. Pretty much fell in love with skating. Good times, a burger meal from Casey Jones and comic book adaption of the teenage mutant ninja turtles movie.

Turbo II? Some of the 80s boards had soft wheels and some hard plastic. That was about the only thing anyone cared about "have you got soft wheels?’.

I bum boarded down the hill outside my nan’s on an orange ‘polyprop’ 70s board with open bearings. Ran that for about two years

I was lucky because my older brother was a 70s skater so ever since I was a toddler I had a z-flex with gull wings and some proper urethane wheels.

They started off soft but after a while they became really hard I think there were similar conversations in my hood, I’m sure my wheels were referred to as stone crushers by more than one person. Loved that board. Ended up leaving it in the backyard one night and rained, I found it a day ir two later and the whole board had delammed and looked like itwas melting Dali style.

Used skate this building on upper richmond road. It had a nice wallride bank running along the front. Not anymore.

Later, if I wasnt at SB/Shell, my local was the riverside at battersea bridge or battersea park.

Was that the first place you ever skated though? I mean, the FIRST place you rolled on a board? If so, damn!!

Saw someone on a skateboard in Saundersfoot (shitty beachside town in Pembs) and it blew my fucking mind.

Whilst I waited for my mum to buy me a skateboard I put down my snooker balls on the tiny path outside by house and put a plank of wood on it and would run along and roll for like a foot.

Spent my first few years skating the path around the edge of that house. It’s all I had.

Did my first backtail on an old microwave and did my first legit ollie in my grandparents working cowshed (full of shit and soaking wet).

If anyone wants to share the link like I did if you click the three dots top left on Google Street View it gives you a ‘Share or embed image’ option and the ‘Link to share’ link embeds the spot when you paste it here.

I always forget Edinburgh is a coastal town. Proms are a classic first spot…I took my board to the prom to skate early in my evolution too.

I used to live across the road from these garages and my older neighbour & his mates skated their polyprops along the path. 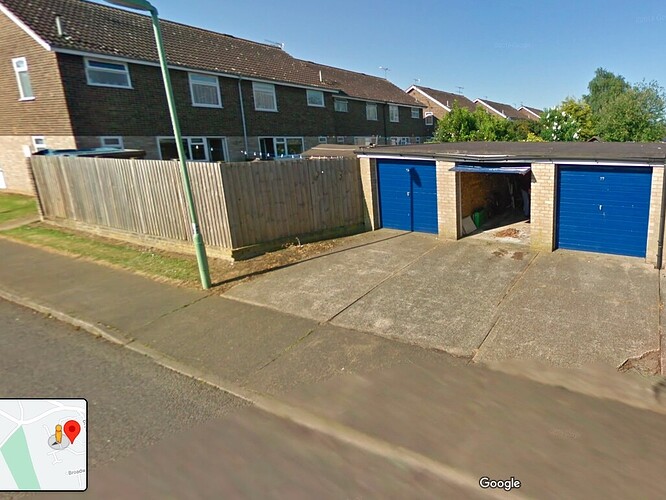 All I can remember seeing them do was hippy jumps, but I wanted to be as cool as they were.

One day my neighbour gave me a board with a slightly broken truck and I learned to bumboard, then stand up on the slightly sloped driveways.

Hippy jumps are still on my wish list and I still wish I was as cool as they were. 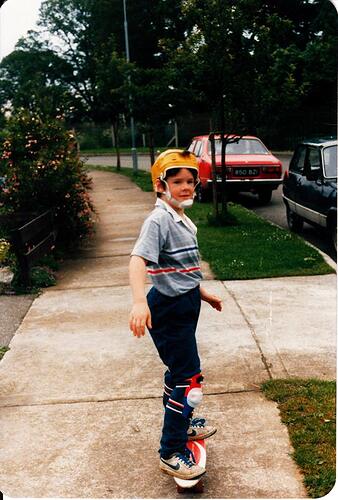 Outside my house in Dublin. This was the actual morning I started skating, June 28th 1987 (my eight birthday). I’m standing goofy on the board but ended up regular.

Another from the same day. 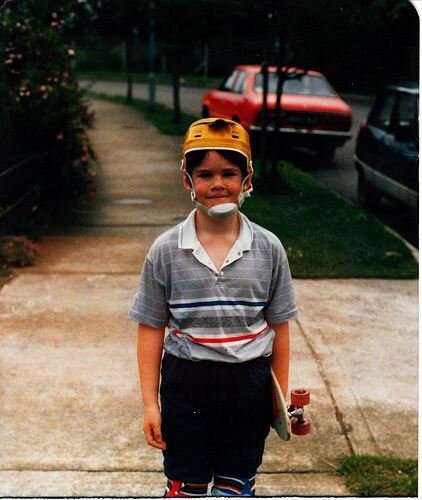 On my drive! Next door had a narrow fibreglass board just bunged outside behind their garage so I inherited that and learnt on my drive. First step on I fell and winded myself lol. Then that skateboard and the one that followed after, were used exclusively for travelling around to friends houses. Much Better than walking!

I saw my first ever Skateboarder at Southport Pleasure Beach ‘Slippery Slopes’ on an old 'Crete snake run, probably around '83. Vivid - pads, narrow board with those old Skool Walkman headphones on, carving down the run.

Then probably ‘85 I visited my aunty in Bath, and some older boys were going down the hill
Outside her house. Thought it was awesome. Still do! It was probably later that year that I got the skateboard from next door.

Nice reminder that the headphones in while skating phenomenon is not a new occurence.

with your hurling helmet? glorious