Got a new one in Quartersnacks’ ‘Favourite Spot’ series talking Grant’s Tomb with Dick Rizzo – the ledge to kinked bank where he did that crazy nosegrind revert in ‘Mother’ and has had a trick into it in nearly every part leading up to that.

(For those unfamiliar, it’s also the other side of the same spot as where Pappalardo does the nose wheelie into a skinny bank in Mosaic.)

I hit up Paul Young too (‘Nevermind’, ‘Bleach’, Bronze and Quasi filmer) who filmed most of it for some bonus commentary.

The AVE/Green Bench one I did previously seemed to generate a decent bit of chat on here so hope it’s cool to thread it. 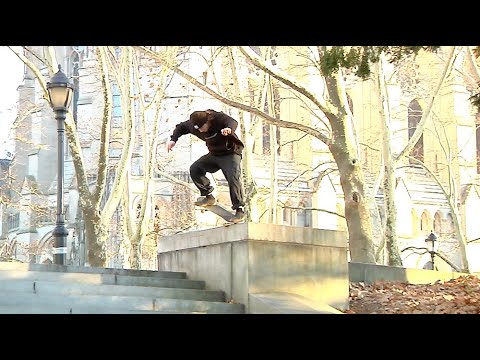 Your videos are cool.
Out of interest, how do you decide on the subject matter with going obvious eg Jeremy Wray’s Water Tower gap?

I’m really into people skating the same spots so, honestly, it just comes down to if a skater I’m a fan of has a recurring location in their video parts. So as iconic as it is, something like Wray and the Water Tower wouldn’t work in this format because it’s one and done.

The first of these was with Gilbert Crockett and that came from tangent about how him having a career based in his hometown has led to him constantly one-upping himself over the years at one particular spot, SunTrust.

The AVE one about the Green Bench kinda started out as a joke. Still can’t really believe that came to be, haha.

Korahn Gayle at Lloyds would be an obvious UK choice. He’s got half of the NBDs down the 3.

Thinking of recurring spots, Jerry Hsu might be a candidate for annihilating those white out ledges in San Jose (off a few stairs and over a sidewalk).

For recent more relevent ones, Max Palmer and that fountain he seems to one up himself on evry part he has.

This is at the bottom of the article on Quartersnacks

This is great, loved both this and the Ave one.

finally got round to this and its really great, excellent work.
but why did I think it was the place in the city with the little black marble hubbas.
what’s that place called?

We examine one of NYC's most famous slabs of marble.

This video is very rad Farran.

Maybe you were thinking of the Courthouse (Tyshawn in “cherry” spot), because it’s right behind Black Hubba?

nope, def thinking of that blubba spot but never heard of it known as blubba.
my brain is old and feeble mind.

Cheers to everyone for the kind words on this, stoked you all liked it.

Quartersnacks just published the rest of the conversation I had with Rizzo covering growing up with Josh Wilson and Paul Young (who provided most of the footage for the video piece), Bronze videos, spots and working on the latest Quasi video. ‘Imagine If You Could Just Rip Across That’ — An Interview With Dick Rizzo |...

Intro & Interview by Farran Golding Collages by Requiem For A Screen Photography by Mike Heikkila Run Painting by Andrew Durgin-Barnes In the blink of an eye, we’ve had a decade of Bronze, a homie video series turned brand that reshaped the... Intro & Interview by Farran Golding Collage by Requiem For A Screen Skate Photo by Mike Heikkila Illustration (via Board Graphic) by Will Gaynor Having left New Jersey to go tomb raiding with Dick Rizzo in this series’ sister production, we...