I’ve sort of been a bit disappointed that this far into proceedings there isn’t a BLM thread on here.

However, I’ve been talking to my sister today who lives in the middle of nowhere - about 300 miles away -and works in the equestrian trade, which is a trade dominated by white, wealthy people (Ironically, I don’t think my sister has a pot to piss in at her level). She was telling me that in her trade BLM is largely ignored and a lot of the focus has conveniently shifted to the injured horse in London which is a very visible attempt to avoid actually dealing with an issue within their industry. It made me wonder how things were being received or promoted outside of my Labour led part of London.

I also just saw MadMax comment in the footage thread and realised that isn’t not that it isn’t important; it’s just not on someone else to create a thread I wanted to see…

Experiences? Thoughts? Anyone had some solid changes at work?

I found this super interesting. 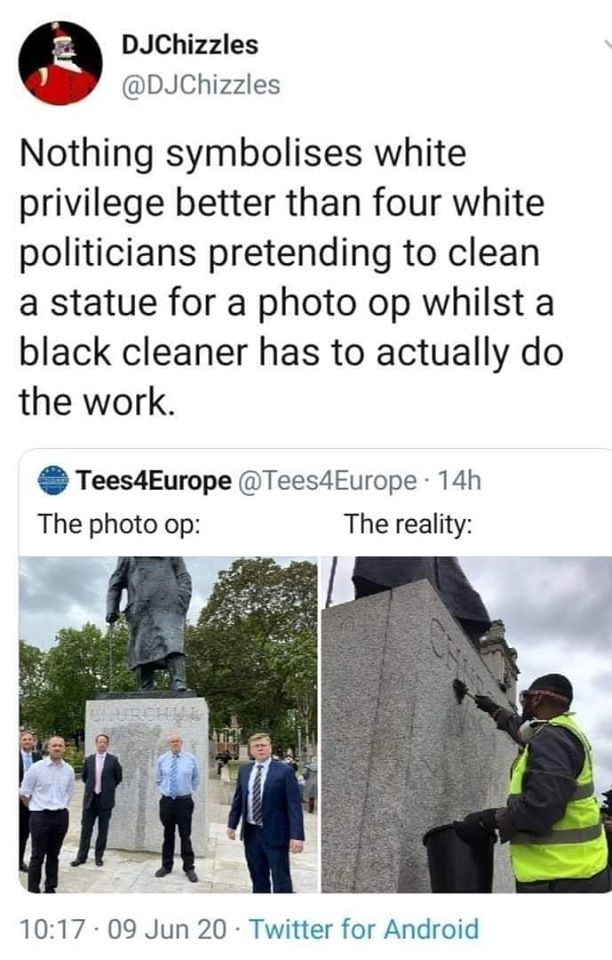 British legacy materialises? A thread about tea? I’m all for it

It’s has been spread across many posts but yes it should come under one thread.

My view from the industry I work in.

The TV industry is way better than the film industry for BAME employees and freelancers, but still mainly a white dominated industry.
The film industry is seriously stuck in the 70’s, especially the construction/rigging/painters/lighting/prop departments. Absolutely dominated by gammon and their many family members. The shit you hear makes me rage, I’ve called a few out but I’m hugely outnumbered.
It’s everything from racism, sexism, homophobia you name it they hate it. And the problem is it’s institutional and passed on to the younger lot . It’s why I stick to dramas where everyone is hell of a lot more liberal and decent.
What i do know is with the gammon in their 40-60’s in the film industry, it’s going to be a long time (decades ) before there is any increase in BAME numbers . It fucking stinks .

More positive for BAME TV is BBC’s “I may destroy you” by Michaela Cole. She wrote , directed and stars in the drama and did her upmost to have as many BAME cast and crew as possible.
It was refreshing. But still mainly white dominated and most of the sets and props were built by myself and 2 others . All white . There doesn’t seem to be many BAME tv/film set builders but things will change hopefully.

Separately we have such a long way to go for racism to be quashed especially in those over 40. Just look at your local newspaper website comments sections especially for BLM protest , just gammon denying it’s important, screaming fake news etc. Very disheartening.
The future is with the kids who’ve made it normal having friends of all creeds and colour through social media . That with celebs, sports stars and influencers it makes them question and challenge their older family/relatives views/ways and hopefully change them to a better extent.

we have such a long way to go for racism to be quashed especially in those over 40.

Saying that is part of the problem.
I just turned 41 and I’m not racist and I feel deeply uncomfortable when I’m near anything racist.

For example, at work colleagues will make derogatory remarks or the infamous comment or jest where the old wink and nudge seems to make it alright and everyone’s on board.

Or, more personally when I see the position friends of my sister have towards non-whites and then their discourse seeps into her discourse. I call her out on it every time. At first she would defend them with the “everyone’s entitled to their opinion” but now she knows they’re wrong.

Back to my first point though, it shouldn’t take ages if we decide to no longer fund racist people or businesses, and actually stand up to people when they say racist things.

Call it white privelege if you want but it’s basically the priveledge we have to actually change things for others.

Im 42 ,I’m saying from my experience and what I’ve seen is racism and bigoted views are way more wide spread in the 40+ age group . There is of course many under that from learned behaviour but I’m on about that age where in the 80’s and you were a kid In the towns and suburbs you’d hear adults being openly and casually racist which then is passed on.
I’m surrounded by the cunts in watford. It’s a real thing and I can tell you they will stay racist cunts as they get older and more stubborn and have their Tommy robinson echo chambers harking back to when England was whiter

These are a lot of your plumbers, builders , scaffolders, roofers , trades people working in their Bubbles angry that their country is being over taken by non white english.

“Go back to Africa” THIS IS WHY THE UK IS NOT INNOCENT. PLEASE SHARE. All of...

There are plenty of these cunts in town and suburbs along with the silent conservatives . Utter scum and a lot of work to eradicate

you know 100% that they voted to leave the EU and you know 100% why. absolute cunts and i’m ashamed to be part of the same society

Having been in a number of mixed race friend groups down the years my personal vision would be for everyone to really get along and not see race as any kind of barrier to friendships, relationships and for workplaces to be properly diverse from top to bottom.

In society more generally, I often can’t stand the American way; why are black people there called African American for example? I’m sure I could Google it but I suppose what I’m really questioning is why is it accepted that a white American is just American but black people need that special label in 2020?!

Even the term ‘black’ is not particularly helpful at times, as Matthew Syed remarked in the Times on Sunday:

We put people with dark skin into a box marked “black” and then assume that any trait shared by some (even a tiny minority) is shared by all - otherwise known as stereotyping. “Some” black people win running races, therefore “in general” black people are superior runners. The inference is so seamless that we fail to notice.

and this was another good point:

Given the analysis, one might think that the mature response would be to come up with policies that liberate black people from these biases and barriers, which are all the more insidious because they are hidden. But - and this is my worry - many people in the antiracism movement seem intent on perpetrating a new kind of stereotyping, this time upon white people, almost as retaliation.

Those points certainly resonated with me anyway.

I work in construction and spent years working on site around blatant racism/sexism/homophobia, theres no getting through to most these people so you end up giving up saying anything and just avoiding having anything to do with them (I never found a better solution). Luckily I now work mainly on my own so dont have to listen to peoples bullshit.
I would always call someone out and question why they say what they do if I hear anything suspect at a skatepark/spot because I think the people there might be more open to changing their opinion/usually they are just ignorant about the subject (living in a majority white/british town doesnt help peoples ignorance)
If anyone has any better suggestions for confronting someones bullshit please help!

If anyone has any better suggestions for confronting someones bullshit please help!

In all honesty, all these years in I just plain avoid certain people. I’ve tried in the past getting across another angle but it is just met with hate and aggression.
It sucks and it sucks that I’d give in and walk away but it is almost like a triage system - educating individuals is like trying to paint the Forth Bridge. So, I feel at this point it has to come from the top…systematic change.

One of the few ways I see these people changing is when their children bring home a non white English boyfriend or girlfriend for the first time.

I remember in school a teacher telling me that if black and white people keep having babies then eventually everyone would be black.

Something along those lines.

My mum sent me to an infant school that was about 50/50 white and BAME which she said she did on purpose for the culture.

What school/teacher was that? You were a couple of years ahead of me but we were at the same secondary school (and junior I think)

What school/teacher was that? You were a couple of years ahead of me but we were at the same secondary school (and junior I think)

One of the few ways I see these people changing is when their children bring home a non white English boyfriend or girlfriend for the first time.

Not so sure about that, that could just become a case of 'oh he/she’s just ‘different’ ’ or they become known as ‘alright’.

It’s a slow burn. Interracial marriage used to be illegal, white people have been lynched because they married a black person. I think over time it has become more normal, I reckon the “this one’s OK” would gradually fade out once it becomes commonplace. I can’t imagine that being something people would say if there was a non-white person in every family. But I dunno.

It’s a start at least