New facts that blow your mind

The tab on teabag strings is so you can stand your cup on it and it doesn’t get dragged in when you pour the water in.

I never realised it was so you could do that. I’ve seen people tie the string round the cup, but that always looks really fiddly to me.

This one blew my mind the other day.

In 1859, a British farmer called Thomas Austin brought 24 rabbits with him to his new home in Australia. Within six years, the country’s rabbit population had swelled to 22 million.

They introduced 100 cane toads to keep the crops in order about 100 years ago and now they’ve got 200 million. Oops.

As with Covid R-number stuff, it seems like we (simple human dum-dums) find it really difficult to get a concrete sense of what exponential growth actually means.

EDIT: that tea trick is wicked. just tried it

I usually wrap the string around the cup handle but the label tuck thing is better.

The birds of Shakespeare cause US trouble

Shakespeare mentions the European Starling once, in Henry IV Part I. That moved a 19th Century Shakespeare enthusiast to introduce the bird into America.

Yeah I wrap the string around the handle too.

Something I heard recently, the hole in a spaghetti spoon is the diameter of a single portion I think

I just go by girth relative to that of my erect penis.
ie. 1 boner = 1/8th portion

Glad I’ve got rice for tea.

I thought you were supposed to pour water first and then put your tea bag in it?

40% of under 30 year olds in a psychology research project said that if the choice was between their smartphone being smashed in an accident and breaking a bone in their hand, they’d go for the hand.

the most pro-brexit thing ever posted on here.

I just go by girth relative to that of my erect penis.
ie. 1 boner = 1/8th portion

I honestly do this.

Either you guys have tiny dicks or youre massively overeating carbs… 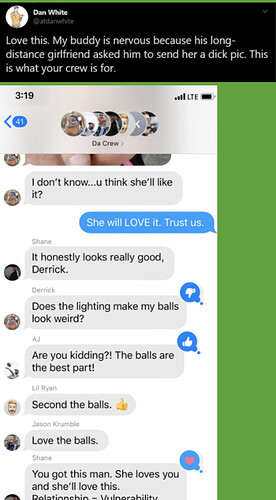 Hahahahaha what the actual fuck