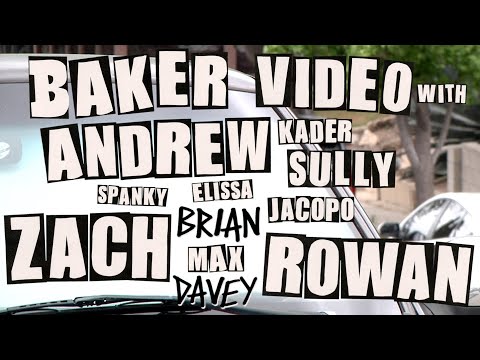 The Boss gutttdamnit… he literally shows all what is possible in thier mid40’s and upward.

Zach Allen just proved all my opinions of him completely wrong!

Baker killing it in game, loved this.

Good stuff! I enjoyed any trick Reynolds did which ended in hillbombing.

Not sure about one foot back smiths or tail grab crooks but the rest was great.

if this was instagram I would reply with three fire emojis.

This was awesome and a very easy watch. Really like this less hammer-focused period in Baker’s existence.

Zach Allen actually did some decent stuff. Didn’t expect that to happen in 2022.

Couldn’t like Reynolds any more.
Stoked on Todd Rundgren.
Don’t mind the crooked tail grab 'cus he can also back three flip down stairs.
Need more Spanky.
Kader’s noseblunt line was so sick.
Already watched it twice, which is insane these days.

Really enjoyed it, I know the boss still rips but didn’t expect him to be that good. Shame not to see more Kader footage in this but whatever he does is sick. Not everyone’s favourite but wanted to see Ellington as I like the guy. Maybe I missed him, will have to have a re-watch. Rowan is next level.

Well that was fucking incredible wasn’t it?

First thoughts - Reynolds looks great in half cabs and is as good now as he was a decade ago.

Why do homeless people proudly display a symbol of the system that has fucked them over on their tents?

Rowan is the Californian Mike Wright on steroids.

I wish they had used Street Hassle for Reynolds’s section instead of the end. It’s such an epic. The elegiac vibe would have been perfect.

Todd Rundgren and Rowan was a genius combo.

The Decline of Western Civilisation, innit.

I’ve not been for 7 years and I do love LA but it’s looking more and more dystopian these days.
It always had Skid Row and visible homelessness issues but it looks out of control these days.
Doubt I’ll go back now I have to pay myself.

The Decline of Western Civilisation, innit.

seems appropriate for this thread really

Reynolds looks better on his board than ever. Not as gnarly but so kind of pared back and economical with his movements and trick choices, looking forward to seeing what more he puts out in his twilight years.

Zach Allen had his moments, I’m not that into his skating but his lines were banging and I enjoyed the tailgrab crook.

Rowan is up there with the best for me. He’s so casual and loose at high speed. Like Antonio Durao…not many other skaters can compare.

Rowan is the Californian Mike Wright on steroids.

I was gonna complain, as standard, about there not being any names but then got to the end. Fine Reynolds, I’ll let it slide this time.

Vid was good though. Reynolds was sick, really surprising to see him still at that level. Nice to see Elissa pop up too. And I’ve never been a fan of Rowan, but I really enjoyed his footage in this.

These lot are all way more recognisable than videos like that solid carharrt one, so lack of names is way more forgivable.