Post clips with your favourite moments of brain-melting skate magic.

what are some bits of footage where reality seems to have glitched for a second?

Love this one: Sean Green (?) at 24.10 in “Candyland” impossibly escaping hill-bomb death

mixture of sheer balls, skill and a ton of luck. The speed wobble/swerve just after missing that woman’s cart-wheel and going into the second hill is so mental. Yep, the spam-o-matic has kicked in…

These threads probably would have been fine for Be Kind Rewind. Pointless threads mean good ones drop off.

Was thinking about who’s a modern day wizard. Marnold and Gustav Tonneson came to mine.

Big shout that, but I’d say Suciu is a bit more MJ levels of tech more than wizardry.

GT is in the wizard category too. Watching him skate in real life is nuts, makes things happen that shouldn’t even if by accident. When thrasher did the UK tour he spent about 20 minutes skating the ramp and in that time ended up on the shelf the side of the tombstone by accident, and just ragged back in. It defied logic.

Ah good shout with Mike Arnold! He’s an absurdist.
Amongst other things, the boardslide at Lloyds here (2.35) looks like he’s got cheatcodes on.

Max Palmer has tonnes of impossible moments. For example, 2.27 here:

also, at 2.37 he does some sort of nosebonk trick. I definitely hear a “bonk”, but what part of the board is bonking what part of the pipe??
Plus, at the start of his “Sure” part he seems to do a backtail on a plant pot, but on closer inspection is floating just above it in a mad shifty ollie kinda way.

As an aside, Jacob Harris has been ace at framing this kind of stuff in his new edits to highlight how uncanny their skating is.

Jake Johnson’s wallride from Mindfield (3.25) which is impossibly stuck on. The 2nd angle in particular looks like he must be surfing some kind of bank or incline, rather than a vertical surface! 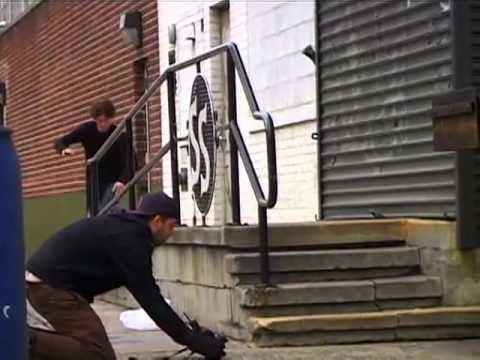 [btw, sorry if this is re-treading stuff from the Be Kind, Rewind thread. I guess what I’m looking for is more rare individual clips, often within sections, which are in some way perception-bending or appear magical. Not necessarily full parts that get you stoked, if that makes sense? Happy for the thread to be locked if redundant tho!]

fuck it, different thread idea all together. keep this.

Andy Anderson does some weird stuff,

I still maintain that I like him, not particularly his style or tricks but damn, some of the stuff and the consistency is mind blowing. He’s getting too involved with those Braille bells though.

and all those who live in the parallel universe of A Golden Egg.