can you play flight sim on this? Have 2 work monitors at home so it’s the perfect time for this shit.

Yeah pretty much anything. Haven’t tried dual monitors but it supports external devices and ultra wide monitors so I don’t see why not!

When I had it it took a little while to be set up, I don’t think it’s “cloud” as we know it, more hardware provisioned per order in a data centre somewhere. But maybe they’ve got smarter since. Performance is great.

There’s a growing trend amongst PC testers on YT to completely ditch their CPU cooler for a tube they fill with liquid nitrogen for benchmarking and overclocking tests. The ridiculously low temperatures around -170C or whatever means some CPUs get overclocked to 8Ghz or so. Not quite practical for day to day work, but cool to see.

@ciaran LN2 OC’ing has been a thing for years if not a good decade or two, usually in world record overclock competitions and the like. Highest OC currently is about 8.7GHz on an FX chip, if you’re into that stuff I’d look up Der8auer and Kingpin to see what goes into that stuff instead of the large amount of clickbaity “LN2 SO COOOOL” videos.

Didn’t realise there was overclock championships! I guess it’s like barista contests then.
I stumbled across the LN2 thing while researching AMD vs Intel CPUs and thought it was pretty mad. I mean, it’s rad to see folks modding their gear and what not, but I need my gear to just work while getting the best bang for the buck. OCing always seemed fraught with danger of burning out your CPU or GPU, and every time I sit down to “do something real quick” it always turns into a waste of 4 hours.

Saying that, I always like how dry and narky yer man there from Gamers Nexus is when he reviews gear. Proper nerd points.

Yeah it’s all kinda calmed down championship wise a little bit in recent years, shrinking of chip dies etc = less ocing headroom plus chips nowadays are so damn good it makes oc’ing almost redundant. OC’ing has progressed so much in the last 10 years and it’s a relatively safe process, the issue almost always lies with the end user not doing enough research and you’d have to seriously be trying to fuck something up to actually burn out a CPU or GPU. You can dial in an overclock in a relatively short timeframe by looking up average overclocks for your respective CPU/GPU along with the common safe area for voltages, plugging the numbers in then bumping up the clocks whilst keeping within the safe voltages. Run a stress test after each number bump until it’s unstable, then dial the numbers back and you’re sorted.

Funnily, most people on modern DDR4 platforms have to OC to get the most out of their RAM and may not realize it counts as overclocking; JEDEC spec for DDR4 caps out at 2400MHz, yet DDR4 kits can go way up to 5000MHz though on average you’re looking at about 3.2-3.6k MHz for DDR4. The manufacturer then rates the sticks for a certain speed, and loads profiles for speeds above the stock DDR4 speed. That’s where XMP (DOCP for AMD I think) comes in, where you have to load the memory profile from the BIOS. Enabled XMP? Cool, now your RAM is running at it’s rated speed and you also just voided your warranty because it’s considered overclocking! What’s even worse is the amount of people who have no clue XMP is even a thing, buy 3600MHz kits and have them running at 2400 or even 2133 like a PC I fixed last year…

Someone in the same vein as GN would be Louis Rossmann, guy owns an unauthorized Apple Repair Store whilst simultaneously despising Apple and their business practices.

Any good webcam/microphone recommendations? Not trying to become a millionaire streamer, just need something pretty good quality for work, for pitches and recording the odd training video etc.

Needs to be relatively budget friendly but I can probably expense it so not too fussed. I have a focusrite interface for music but don’t have a proper mic yet.

Probably some good stuff that you’d find for podcasting etc? Doesn’t pick up the heavy breathing.

I stumbled across something similar to what you wrote here in Linus Tech Tips, didn’t realise how common place it was. Turns out my mobo is already set up to handle the 3200Mhz RAM already. Got an upgrade to 128Gb in the post.

Couple of questions for you
1 - Pretty sure my old motherboard is dead. Repair place says it boots half the time and will run some more tests over the weekend and see if they can work it out. If not, I’ll need a replacement for an old dual Xeon LGA 2011 like my Asus z9pe-d8. Something with loads of space for 3 x GPU, AIO cooling and 5 HDDs. Anything you can recommend?
2 - The second M2 drive in my new build just vanished on Wednesday. No sign of it in Windows or Disk Management - all my current projects just vanished. Most of it was backed up via Dropbox, but that properly put the shits up me and set me back a couple of days on a critical deadline. It’s only 1 month old, a Corsair MP600, 1Tb. Haven’t taken it out of the machine to put it in an external caddy yet, will do so over the weekend. Ever hear of this happening?

well “dead” can be subjective, i have an x58 board that doesn’t post and by all accounts is dead, when in reality i just have to mash the cmos/memok button to get it to boot, so i’m assuming the cmos battery is dead. could be a whole host of things but i’d def try booting it with a single stick of ram in each bank to rule out memory issues - the board i have now (supermicro x8dtl-if) is one i got from a friend and it wouldn’t post with any ECC memory he had, works fine for me with generic Hynix gear. lot of variables in server parts.

as for a 2011 replacement board, bit of a ropey one. could maybe check out some of the chinese boards where im p sure they’ve reverse engineered intels c602 chipset and produce boards on their own

if you wanna be a bit more legit, maybe something from supermicros x9 line. 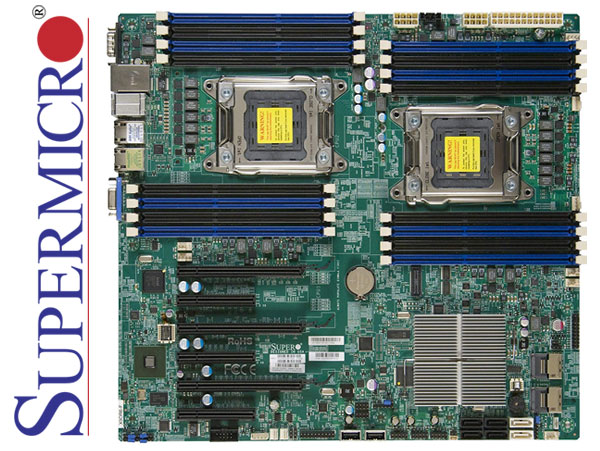 or just straight up replace the z9pe with the same board - prolly still pay a pretty penny as while 2011 is gone from enterprise usage it still holds weight for home lab usage etc.

as for the m2, disappearing out of the blue sounds strange. is it showing up in the bios? if it is, probably a windows issue - i had a similar thing with an m2 drive on a build for a friend where it wouldn’t show up, and windows had installed some odd RAID driver. from what i recall i used hwinfo to look at pci bus entries, found the m2 drive (itll be named after the controller so something like phison most likely), made a note of the pci address, then went to device manager and found “amd raid bottom device” on the same pci address and changed the driver to nvme - this is all assuming you’re on amd btw.

Put in a new CMOS battery already, no joy. It was posting to BIOS and I got into Windows when i brought it home from repair, only for it to be dead the next day. Managed to get into BIOS a few days later, but it wouldn’t boot from the new SSD, saying there was no Windows Boot Manager. Ballache. Had looked at a straight replacement for the mobo, but they’re both hard to find and expensive. That Supermicros one would be pretty good though

Yep, new machine is AMD based. Drive showed up in the BIOS somewhere, but been flat out with work and haven’t made the time to investigate properly. Will look at that RAID driver fix and see how I get on.

Thanks for the tips, much appreciated!