@Spanky basically a scent gland, little sacs that fill up and are meant to drain naturally when dogs do their business. common problem is they dont drain naturally causing discomfort/dragging their arses etc so they need draining manually.

@Mush mentioned it to him as it’s not the first time we’ve had to have them done, seems to occur every few months.

It’s possible to drain the arse glands yourself with a pair of gloves on although the look on my dogs face when I first tried it has put me off. I’d probably leave it to the pro next time.

Yeah, never something that I’ve been even vaguely tempted to DIY. Cat’s have the same thing, I normally assist by holding the front end. Cat’s don’t have the most expressive faces but they definitely have an expression for that.

Think our Irish mate might need a trip to the vets

yeah I’ve done it years ago with my springer and he was relatively fine with it, wouldn’t try with the shihtzu she’d have my fingers off 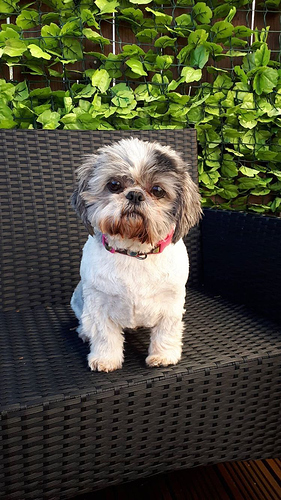 Not called Sue, is she?

I don’t remember too much of a smell from the bits that squirted onto my t shirt. I was kind of expecting like a mega skunk deal but it was more like mild musty piss. I suppose dogs have amazing sense of smell so it doesn’t need to be that strong for them to clock each others scents.

Not called Sue, is she?

Been looking at getting a dog recently. This creased me up. Seemed apt.

My laptop has one of those broken left click buttons so it sticks in after every press and I might try and liquify it using a golf club sooner rather than later. Rage.

You only need to press it once.

that’s not the most enticing frame though.

Really tired after picking up the slack over the weekend so the Mrs could get back on top of things a bit. Did bath time with the littlun, then handed her over to the Mrs for stories and came down for a nice sit down before tea.

Only to find out the cat had coughed up a furball almost as big as her. And we’re nearly out of kitchen roll.

Great. Sorted that out, noticed the swing is still out in the yard. No problem, pop out to wedge it back in the shed. Didn’t bother to shut the door cos I was only planning on being out a minute or so. The cat followed me, and at roughly the same time we both spot a baby sparrow about six feet away. I turn to prod the cat back into the house, and at the same moment the sparrow flies full pelt through the door I’d left open, followed by a furry streak of lightning.

By the time I catch up, the bird has bounced off the wall and been caught by the cat, who is parading around with it in her mouth. I try and shuffle her towards the door, but of course that makes her drop the bird which ricochets of various surfaces before getting trapped again by the fire.

A tense game of cat and bird ensues, which eventually culminates with me managing the wrap the poor feathery fucker in a towel while it’s cornered under out little bureau.

It flew off when I released it outside, not sure how long it’ll last. All I wanted was a sit down!

Just got made redundant somewhat out of the blue and saw all my work passwords getting changed in real time. Boy they fucking locked me out of everything in no time flat. Actually quite impressive.

Hope you are ok Les. Was the same place as before?

Woah! That’s fucked mate, really sorry to hear that man especially seeing it happen right in front of you

sorry to hear that man, what industry you work in?

Damn. In light of recent events it might be a blessing though, right?