Ordered mine today, looking forward to receiving it.

This guy contacted me a while back to ask if I could send HD photos of all my 1992 decks but I couldn’t be arsed to do it. I was very busy at the time. He must have put the entire book together from photos that have been sent to him because I don’t think he took any himself. Kind of mad.

thats testament to the power of persuasion, ha

Yeah I am really impressed he’s managed to get so many!

Did he tell you what the pics were for?

I can understand how someone random asking for deck pics over the internet could lead to confusion.

He did yeah. It sounded kind of good but also sounded like ballache. People fairly often get in touch asking for the exact dimensions, measurements, close up photos etc so they can make replicas. Can’t be arsed with that either

Haha, if it was me I’d be a bit sceptical if it’d ever make it out as an end product too.

Yeah that’s why I shared that story. It sounds like an unlikely way to put a book together but he’s made it work!

Just received my copy of 92ish.
Proper trip down memory lane of RAD product pages and shop walls in 92 (and epilogue 93).

Basically the Disposables with less information and lots of gaps. It’s got eleven World Industries boards and 39 Powell boards.

That’s a pretty generous description. Cliver is a real authority on skateboard graphics with tonnes of inside knowledge and connections. I don’t think Manuel claims to be on that level he just pulled together as many pics of 92 decks as he could get.

He did well to get the pics of boards that he did. Some of the World/Blind/101 collectors won’t even tell other collectors what they have, there’s no way they’re going to publish it in a book. It’s all about giving up as little as possible in trade for as much as possible back!

I just got hold of a big stash of 80s/90s clothing. Trying to trade it and sell it now and it’s a nightmare dealing with some of these people haha.

I like it.
I don’t need to read any more interviews with Cliver/VCJ/Mackee etc - that’s all been covered already.

I would like something in-depth re Jeff Klindt and Kevin Ancell as they were hugely influential but are probably the least explored but obviously that’s not going to be easy since Klindt has been dead for 10/15 years.

The book does what it says - I’d forgotten that Powell did a Lance Conklin ‘Love & Rockets’ graphic presumably without the thumbs up from Fantagraphics/Jaime Hernandez - I’d love one of those.

Also there are loads of graphics in there that aren’t in any of the other books.
It’s worth the £30 I think 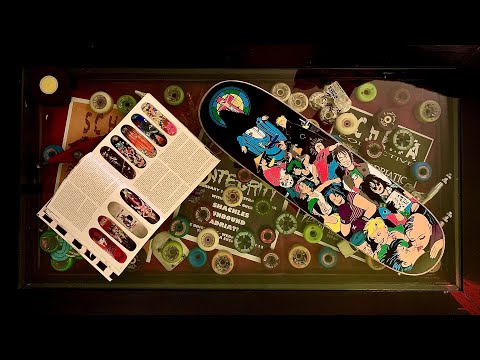 Embarrassing how little the dude knows about the graphic - Love and Rockets is massive, like one of the most famous comic series there is.
Doylum

Tidy! That’s super affordable for a labour like that. Gonna try snag one, come pay day